In a roof replacement there can be many trades involved including, but not limited to, roofers, HVAC technicians, framers, and electricians.

Some of our roofing projects include: 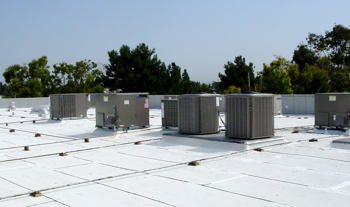 We are proud to announce the completion of the new roof system for Munroe Baldwin, LLC.

We coordinated the project from front to back, including evaluating which HVAC units needed to be replaced and which simply needed repair.

Once the scope was agreed upon, we contracted a structural engineer, obtained drawings, and put the project out to bid.

This project included the evacuation and removal of ten roof-top HVAC units and four condensing units using a crane during the weekend. The new units were placed upon new, structurally-reinforced platforms and crickets were installed to redirect water flow around the units on the high side of the platforms. Inside, the corresponding digital thermostats were installed. Four condensing and new fan coils were also replaced and put on new wooden platforms with sheet metal caps.

While these units were being replaced, a new, four-ply, built-up roof with Title-24-compliant capsheet was installed and warehouse R-19 roof insulation was reinstalled; foil scrim capped it off.

Since this work was completed during the summer (during unseasonably hot and humid weather), we supplied portable air conditioning units during removal and replacement. All of this work was done in fourteen business days. We are proud to have been able to minimize office downtime for our client and his tenants.