I’m sorry to say that Imad passed away September 6, 2011.  Imad had been such a great friend to me on Twitter, especially regarding our Riggins account. He was an inspiring and encouraging person and desired that the AEC community get on board the social media train before they were completely left behind.  He was the kind of person who was a friend to all.  As a Twitter user, he was a “virtual coworker” and part of my daily life.   He will be sorely missed. 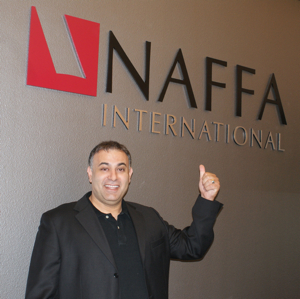 At first, I did not see the business benefit for using Twitter. I thought it was simply a social media platform for connecting with friends and exchanging trivial information, so I dismissed it. I did not understand how it worked in the beginning and where to start. So I opened an account and that went dormant for while.

I’m very active; for me, three to four hours a day, minimum. Some of this time is done early in the morning, throughout the day and late at night (PST). With followers located in over 12 time zones, to engage one-on-one in real time (not required, but great at times to experience) becomes a challenge! So it’s not for everyone and may not be possible or practical for most.

Using social media is an integral part of my business and I have incorporated it within my daily workday. Most users may get by with twenty minutes a day. It just depends on what you are trying to accomplish.

Learn how Twitter works, by signing up and watching others (start by following some). Follow smart people (you will find them soon enough in whatever subject you are interested in).  My initial comfort zone working with Twitter took about three months. Post topics you find interesting, answer questions in areas you have expertise in. Start building bridges of friendship with others.

I use many since I’m interested in numerous subjects. Some are related to my business- the building codes and construction regulations; others are global topics that fascinate me. But probably one of the most I use would be #BCDG (Building Code Discussions Group), the online building code forum that I founded and administer where architects, engineers, and code officials go for expert opinion on everything to do with building codes.

I have a number of friends and colleagues on Twitter whose opinions I respect and value; there are too many to list here. Since I’m interested in many global subjects beyond engineering and building codes, some tend to be located outside of the US.

Social media has become a part of our lives, our businesses, our economy, and more. There’s no denying or ignoring it unless you want to stubbornly cling to the past and try to function in a world that is rapidly leaving you behind. Businesses and individuals are clamoring to set up Facebook pages, Twitter accounts, LinkedIn profiles (and more) in a frantic effort to remain relevant and ride the wave this relatively-new method of communication has become.

So don’t wait to jump in and claim your piece of the pie in this global economy that we find ourselves in.  Architects, engineers, code officials, and the AEC industry at large has to join social media and become active users. Only about 35% of US companies are successfully using Business Social Networking at this time and the US lags behind many countries. The AEC industry is about two years behind in adopting social media; that has to change in order to be competitive, relative, and keep our edge.