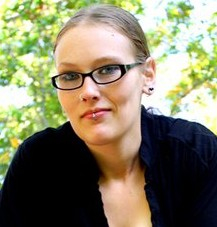 Trying to figure out what to “tweet” about. I had no real help with the account, so I had to learn everything on my own by watching other accounts, trying this or that, and figuring out what worked and what caught people’s attention.

No schedule. I start around 7:30 a.m. central/standard time, and tweet throughout my whole day. I am also the Logistics Clerk for my company, so my time with Social Media works around my duties of shipping.

Follow accounts that are similar to your industry. Be kind and generous with your RTs (retweets) and give out thanks anytime someone mentions you or RTs your tweets. Do not follow others just because they follow you. It really doesn’t help the image you are attempting to build for your account. Retweet information that is relevant to your industry, or in the world around you. Keep it interesting.

I have two: #ClickHappy and #FBLT. I made up ClickHappy once while talking to Bridget (@RigginsConst). She added the hashtag and it made me smile.

#FBLT was created by @Sundt and the other “Fab 4,” as I’ve nicknamed them, @AZDurawrap @Therm_All @RigginsConst have all helped create its popularity. It brings companies together on Facebook, through Twitter, linking everyone to everyone else.

I’ve taken up the torch, too, trying to help out the cause with my #FBLT lists (http://bit.ly/eW5dfL and http://bit.ly/f9l4mV)  and #FBLTtips.

I can’t say I have a mentor, but I did learn a lot from @Carol_Stephen and @ToyotaEquipment (Kyle). They frequently give thanks and they both retweet interesting and informative pieces relevant to their niches/Industries. I think I learned about @Carol_Stephen from @SanJosePlumbing, who joined the scene about the same time we did. I think I started following Kyle because I kept seeing interesting information being retweeted from @ToyotaEquipment, and the rest is history. 🙂

If anyone started with that list, I think they would be in great company.

First, just remember to be generous and tweet interesting information. Secondly, I really appreciate Bridget (@RigginsConst) for starting this series and I appreciate even more that she thought me worthy enough for a feature! 🙂 Thank you.