Lately it seems that anyone I talk to about social media is scared of twitter. It is perceived to be  a “new techy, geeky thingy;” and closer to the truth, we are scared of the unknown.  What’s worse, there have been many nay-sayers, lawyers with postings on possible arbitration, and skeptics who expect Twitter to either have a quick turn around (ROI) or it’s deemed a waste of time.

As an experiment, we began our twitter account in March of 2009 and slowly began following peers in our industry, local businesses, and the like which lead to a group of followers and a voice within the construction industry and community here in Orange County, California.

In August of 2009 we began the first phase of a large, two-phase project in Chatsworth, California, for a returning client, Earth Island Natural Foods, the manufacturer of the Follow Your Heart product line. Imagine our surprise when the mention column of tweetdeck showed a disgruntled employee of our client!

@DanielleJangmi: @rigginsconst you guys are sure making a lot of noise downstairs here at Earth Island! my head hurts and its only 8:30am!

What should I do?  This is where everyone freaks out about being a business on twitter:  negative comments on your service, brand, or product.  I will admit that I hesitated a bit, but once I saw this tweet from the head chef one of the chefs at our client’s facility, I put a call into our field superintendent, Mike Schnabel.

I informed him of the content and he immediately went upstairs and spoke with Danielle, explaining the situation to both her and her co-workers.

Not long after that, we had an incident involving a fire hydrant.  Two weeks later, there was more pounding, but the complaint had softened because a compliment was affixed at the end: “but Mike is super cool so that helps!”  By December, Danielle was publicly praising our superintendent to us and her followers.  That was a remarkable turnaround and invaluable to us and to our superintendent.

Just by doing a few simple things, including 1. being on twitter; and, 2. noticing Danielle’s use of @rigginsconst (she found us) in our Twitter stream, we were able to respond to her both via twitter and in person with face-to-face customer service.  That interaction was a platform upon which Mike built a great working relationship between our company and our client’s valuable employees for the duration of the project.

“Conversations start in Twitter and then spread beyond the platform’s seamless boundaries, rapidly reaching customers, vendors, recruits, and partners in a wide variety of markets. You can find potential customers on Twitter and perhaps snag a sale. You can also find conversations with consumers who are unhappy with your products and assuage them quickly and publicly.”

Here is a pictorial rundown of the four major interactions between us and Danielle.  Enjoy and tell us what you think?

Click here for a printer-friendly, 11″ x 17″ diagram of the conversation. 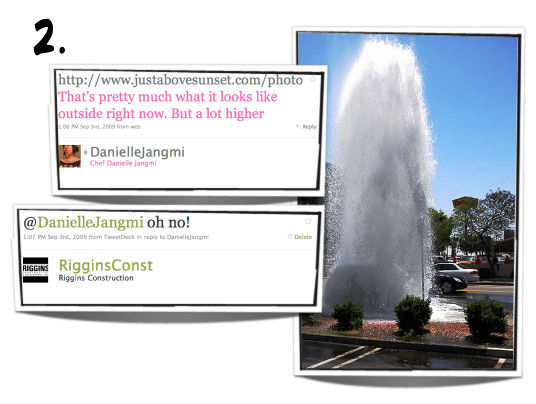 One thought on “Case Study in Customer Service – Twitter Style”