You get out of Twitter what you put into it. It’s that simple. One of the reasons why Twitter has been so valuable to me as a person and indirectly to this business, is because of the way I’ve chosen to use it.

I would like to introduce you to (most of) my think tank. 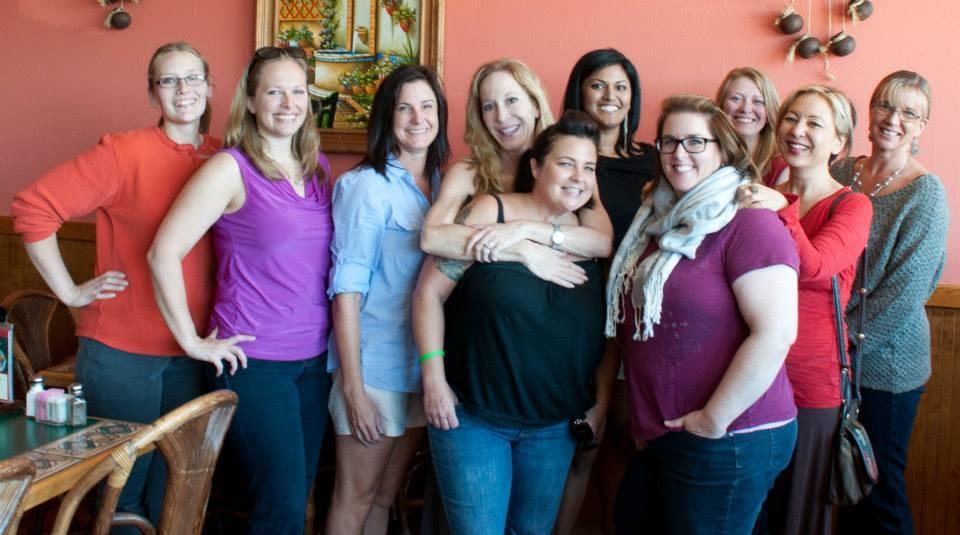 We all met on Twitter. Actually Wendy (not pictured) and Cyndi started Facebook Liking Tuesdays  (#FBLT). Tweets became friendly, Twitter relationships migrated to Facebook, and those friendships deepened. We have become a group that supports one another’s careers and pursuits. If anyone has a question, there’s surely someone in this group that knows the answer.

This is what I call the Human ROI (Return on Investment) of Twitter.  I know that my life has been indelibly altered because of these women. I may even dare to say that much of the fruit of my labor here at Riggins is because of the education, support, and brainstorming I’ve done with them.

I’d like you to meet them, too. So here they are, as pictured, from left to right.

When I met Roxanne she was tweeting for Combotronics. She has since started her own social media company R3 Social Media in Tulsa, OK. She’s very resourceful and is making an impact on her community. Find her on Twitter at @R3SocialMedia.

Pam gets the geek award in our group. She is a master at SEO and Facebook’s Edgerank. But she doesn’t stop there, she also builds WordPress sites, hosts webinars, coaches and trains, speaks at business groups, and manages social media for several clients. She owns Pam Ann Marketing and can be found on Twitter at @PamAnnMarketing. I constantly refer people to her for both SEO and website development.

Deirdre is your go-to girl for business development and marketing. Empathetic and intuitive, she’s also a networking guru and a writer to boot. For years she’s worked in the AEC industry and has a wealth of experience. She owns Tank Girl Marketing and can be found on Twitter at @TankGirlMktg.

Cyndi is remarkable. Street smart and witty, she is also very hospitable and hosts our annual weekend retreats. She owns and operates AZDuraWrap, a mobile shrink wrapping business. They wrap helicopters and boats and anything in between. I’ve even seen a slide at a pool wrapped for winter. She can be found on Twitter at @AzDuraWrap. Cyndi also finds the time to manage several other social media accounts for companies in Arizona.

Amy has a diverse background that includes teaching, deejaying, comedy, and sales. Amy’s business, The Fab Social, gives her the opportunity to bring her diverse background to the client’s advantage. Though she’s a huge Twitter nerd, she also rocks Facebook. Not only does she have a thriving business, she also started a non-profit and is making the film “Social Media Stole My Kidney.” An advocate for living organ donation, she also hosts the weekly #KidneyChat. Amy can be found on Twitter at @TheFabSocial.

Kirti is energetic and fun. She specializes in marketing, event planning, and public relations. She is famously known as one of the creators of the Mac & Cheese Thowdown. She owns Diya Marketing and can be found on Twitter at @DiyaMarketing.

Kendra is one of those people who rarely brags about herself. In fact, this year we found out that she designed, coordinated, and marketed the Ecoasis line of roofing shingles when she worked at Malarkey Roofing. She’s known in the solar community for championing #SolarChat, a regular twitter chat about the solar industry.  When I met her she was tweeting for NESLUSA. She can be found on Twitter at @Kendra_Hubbard.

Carol’s technical background and thirst for knowledge is what gives her the edge in the startup community. She is an avid blogger, Twitter nerd, and Pinterest Queen. She has a very generous soul and will stay up late at night to make sure everyone who mentioned her on Twitter is thanked.  I met her when she was tweeting for San Jose Plumbing. She owns Your Social Media Works and can be found at @Carol_Stephen on Twitter.

This year we got to meet Beth. She and her husband own and operate Adventure Auto Glass, a windshield repair and replacement company in Prescott Valley, Arizona.  She’s blossoming into a social media diva in her own right. Follow her on Twitter at @AdventureGlass.

8 thoughts on “My Think Tank (No, Twitter is not a waste of time.)”